"The artist must have something to say, since his task is not to master the form, but to adapt this form to the content." Kondinsky W.

The purpose of my work was organised as research to develop a space that would help people pass difficult days in isolation, as well as feel healthier and psychologically stable in a comfortable environment.

The aim was achieved using the following methodology.

The first part is a study of interviews with three groups of people: families with children, single professionals and elderly people. The interview was conducted on the internet and covered the following questions concerning the general organisation of the space, the daily routine, wishes that would like to improve or make it more comfortable, the difficulties that occurred during the isolation, the emotional component of the question.

The second part of research was based on the study of the relevant literature of art historical books and Internet sources, research by scientists related to the topic of Covid-19. Identifying common patterns in interviews, conclusions related to the fact that the space should be more functional and more minimalistic, and it is also important to bring art and creativity into the space. It was revealed that creative work helped people to switch from everyday problems and feel more relaxed and calm, helped to concentrate and find new ideas. It was identified that many people lack tactile touches during isolation. Therefore, some people found themselves touching different materials and this helped them for a while.

As a result, it was decided to go a more creative way, to give participants the opportunity to show their imagination and creativity, which liberates and gives more possibility for understanding complexity and finding solutions. Paying attention to the emotional component and the importance of tactile sensations, prototypes were developed for testing. Identification of deep values and the most important memories and resource states of a person through practical testing Understanding the importance of all three components of the technical, emotional and creative component, in the context of survival in these circumstances.

I draw an analogy with a Montessori room for children. Where, for the positive and comprehensive development of their internal state, the mechanisms of external work with small objects are used with their hands. The same principles of development can be applied not only to children, while also to adults. Moreover, conducting research and analysing the emotional and tactile component, I realised that hugs are what a human being lacks most of all. Then I created a prototype for experiments, it consisted of small rectangles made of wood with different fabrics and textures. The purpose of this study was that people could touch the material and describe their condition.

The questions which I ask was: – What associations does the subject evoke? – Does it feel like what? – Does it feel like where? A person builds a certain associative series that helps him to understand his feeling and the nature of his feeling more deeply. Then, I began to think about how to integrate different materials into the kitchen space. Because the kitchen is a place of attraction in the house, as well as it is very functional. At the same time, it would not look like just a decoration, but it was original emotionally and visually good.

Speaking about space and interaction with it, I was inspired by the concept of Immersive Theatre. A place where action and art are combined into one. I found that the picture that hangs on the wall in my room during all this time, most conveniently corresponds to the theme of the kitchen and my project. I came to the conclusion that Suprematist paintings very well reflect the emotionality and functionality of objects. Then I decided to use the Supremacist paintings as separate components of one whole. Moreover, I found it experimental to divide them into fragments and make objects out of it that can be considered in the context of individual items in the kitchen. I found very emotionally strong that different between a picture that is in a frame is perceived in a completely dissimilar way than a picture that goes beyond the box and is embedded in reality.

These studies can be continued in various fields, other paintings can also be analysed and reinterpreted in this way, not only in residential spaces, but also in public spaces, and can also be considered as a method of art therapy or a creative approach in gallery spaces. 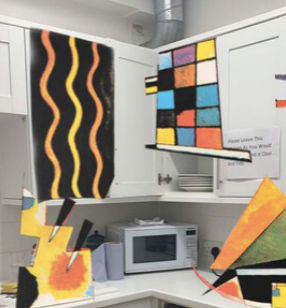